Event Report: The revision of the EU legal framework for orphan drugs and its impact on Germany 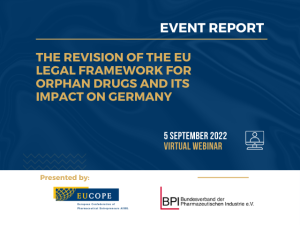 On September 5, 2022, the European Confederation of Pharmaceutical Entrepreneurs (EUCOPE) and Bundesverband der Pharmazeutischen Industrie (BPI) organised an online event on the revision of the EU regulatory framework for orphan drugs and its impact on Germany. The upcoming revision was discussed together with patient representatives, policy makers, regulators, physicians and representatives of the industry and counted on the participation of more than 200 attendees.

In the case of medicinal products for rare diseases, two political strands are currently running in parallel: the EU is revising the regulatory framework (advantages of approval and market exclusivity) and the Bundestag is discussing an AMNOG reform.

The German AMNOG treats orphan drugs according to EU approval criteria. The two strands of regulation are indirectly related. Without careful consideration of the impact and implications of the discussed provisions we risk that the combined effect of these two reforms produce a double damage.

To further advance a European strategy on rare diseases as well as the discussions on areas of unmet needs, an open exchange with all stakeholders should continue to take place in order to avoid hampering the achievements of the current system.